I am trying to get a dataset (preferable worldwide) that has the attributes (height, weight and age). The only decent dataset that I have been able to find was from here: https://stats.stackexchange.com/questions/20265/human-body-organs-growth-graph-or-data which just gives you the percentiles for a certain age.

Ideally I would love to get a dataset that allows you to differentiate this by sex, ethnic background etc. If a open dataset exists it would be good to hear of it.

Try the Demographic and Health Survey (DHS). They have what you are looking for, for a large set of countries. On top of that you will in part be able to identify family ties, and you can even get access to geo-coded data. The data has answers to an extensive questionnaire.

You have to "apply" to get the data. But that is just a formality -- even as a undergraduate student with just a one-sentence research proposal you are likely to get access within a few hours.

Edit: The surveys consist of several modules, some modules are only administeed to female respondents, some only to children and so on. Sometimes different waves in different coutnries contain a different combination of modules. Depending on what exactly you're studying you'll need to figure out what exactly your needs are. To show you that the data exists I pick on example: Egyptian women in the 2014-wave. You'll find the data here: 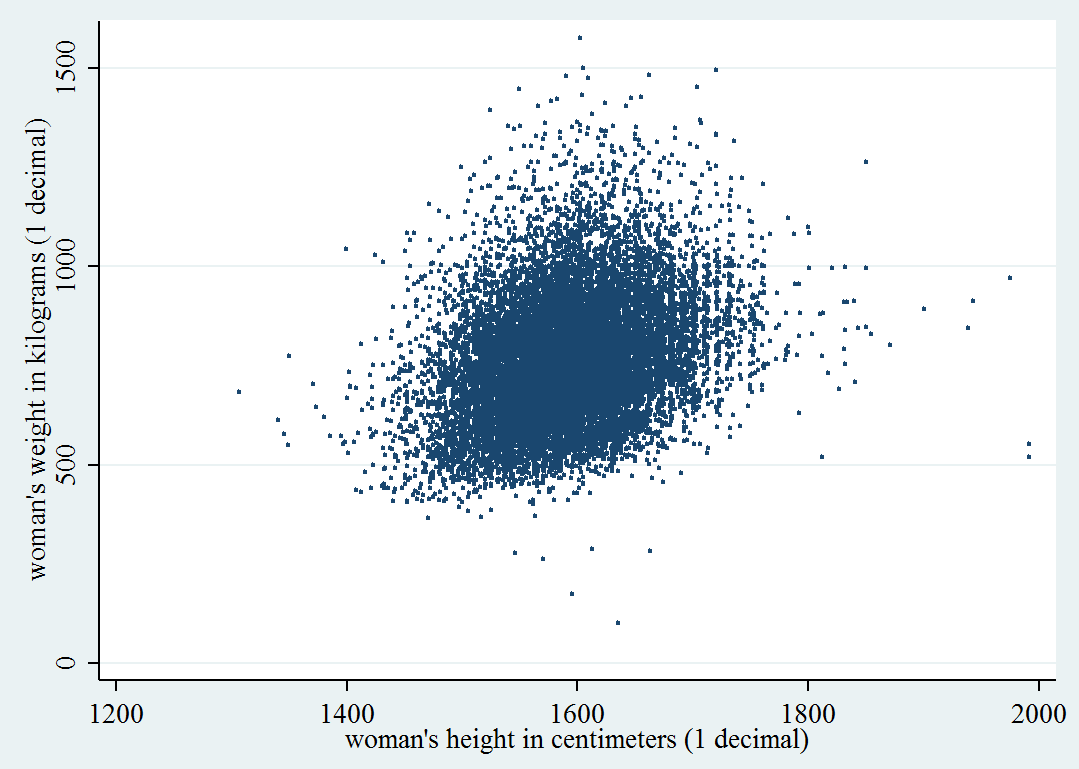 Okay, this is a very specific dataset for the !Kung San people, but it has height, weight, sex, and age fields. Reference was found in McElreath:

"The data contained in data (Howell1) are partial census data for the Dobe area !Kung San, compiled from interviews conducted by Nancy Howell in the late 1960s."

Here is a set of individual weights and heights for 25,000 children in Hong Kong. There is no age or gender information, though, which does limit its usefulness.

From the same site, there is a table of heights, weights and ages for 1035 baseball players, which is a highly unrepresentative sample of the general population, but possibly interesting?

There are also some open anthropometric databases that include height, weight, age and lots of other measurements, mostly relevant to ergonomics. This page has data from a few US sources.

For the United States, the Behavioral Risk Factor Surveillance System (BRFSS) contains this information on over 400,000 adults every year. According to the website, the BRFSS is a cross-sectional telephone survey, conducted monthly using a standardized questionnaire. It includes:

prevalence data among adult U.S. residents regarding their risk behaviors and preventive health practices that can affect their health status.

As the codebook illustrates, it has: 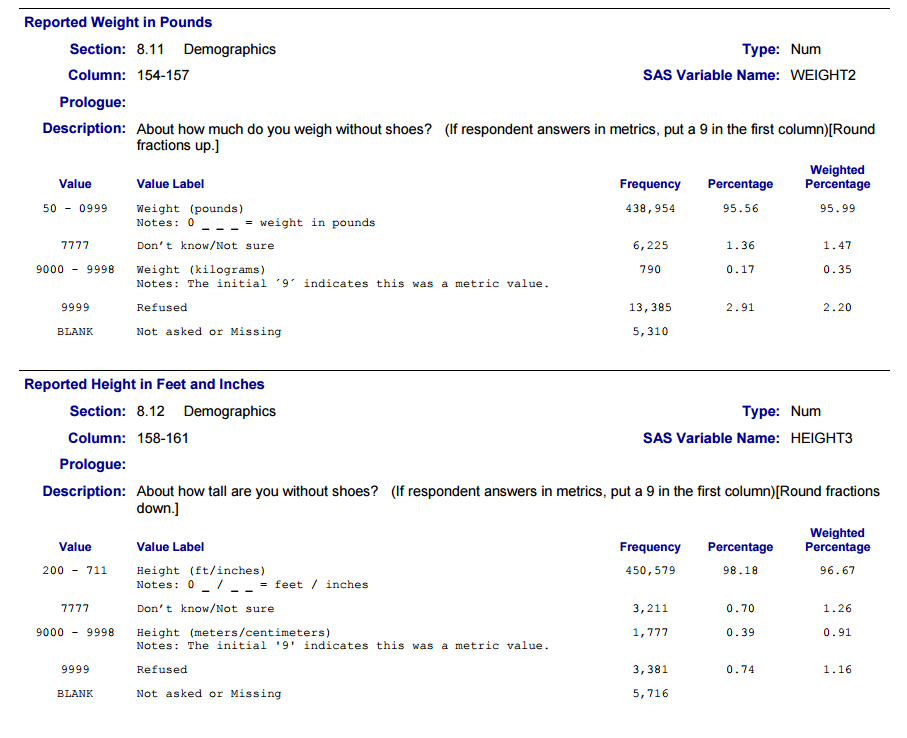 There is an amazing academic project NCDRisC that deals with this kind of data. Check out the aggregated data sets that they distribute for free.

Also pay attention to the high quality papers that they published in top-ranked journals.

Also, there is an amazing collection of soccer data published openly at Kaggle -- European Soccer Database.
Make sure you check the diverse examples of analysis of this dataset -- the so called kernels.

From the data source description:

This is a small dataset that I gathered manually -- Ice hockey players at IIHF world championships, 2001-2016.

The dataset contains 6292 records of 3333 players' height and weight parameters at 16 world championships.

There is also a blog post with some analysis of this dataset
https://ikashnitsky.github.io/2017/ice-hockey-players-height/

The world health organization published a quite detailed analysis of age vs. height

and of weight vs. height

for boys and girls separately. Those pages have links to both PDF tables and Excel files.

The example plot is also available as a table in pdf format. Maybe you can construct a pseudo data-set from this - dependent on your motivation. 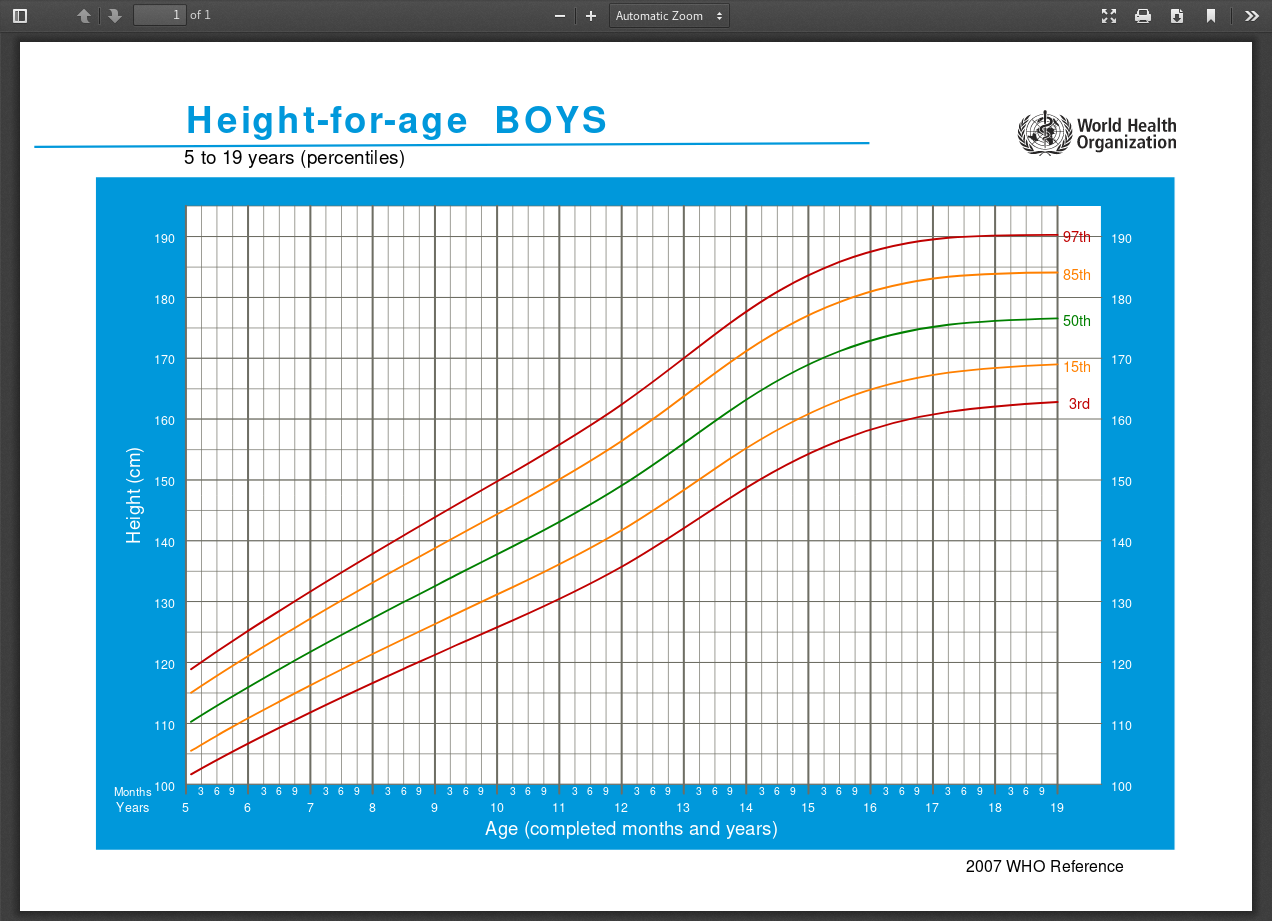 You can also get the data behind the WHO reports, in txt or xls format:

Height for Age (5-19 years, boys and girls, search for Expanded tables to get the .xlsx files): https://www.who.int/toolkits/growth-reference-data-for-5to19-years/indicators/height-for-age

Weight for Age (5-10 years, boys and girls, search for Expanded tables to get the .xlsx files): https://www.who.int/toolkits/growth-reference-data-for-5to19-years/indicators/weight-for-age-5to10-years

Not the answer you're looking for? Browse other questions tagged medical or ask your own question.