What is the difference between US Census definitions of "Urbanized Areas" and "Urban Clusters"?

I am trying to classify US Census tracts as urban, suburban, or rural. The Census Bureau provides a table with counts of people, and classifies them as either urban: urbanized area, urban: urban cluster, or rural.

According to the US Census Bureau:

Urbanized Areas (UAs) of 50,000 or more people; Urban Clusters (UCs) of at least 2,500 and less than 50,000 people. “Rural” encompasses all population, housing, and territory not included within an urban area.

I am wondering if there were a more practical way of thinking about these. Is a "Urban Cluster" more commonly associated with what we generally think of as "Suburban"? Or is not the correct way to think of these counts?

Look at the National Center for Education Statistics Urban-Centric Locale Codes developed by U.S. Census https://nces.ed.gov/ccd/rural_locales.asp. You might be able to modify that approach to accomplish what you want. They use principal cities to delineate between "urban" and "suburban" 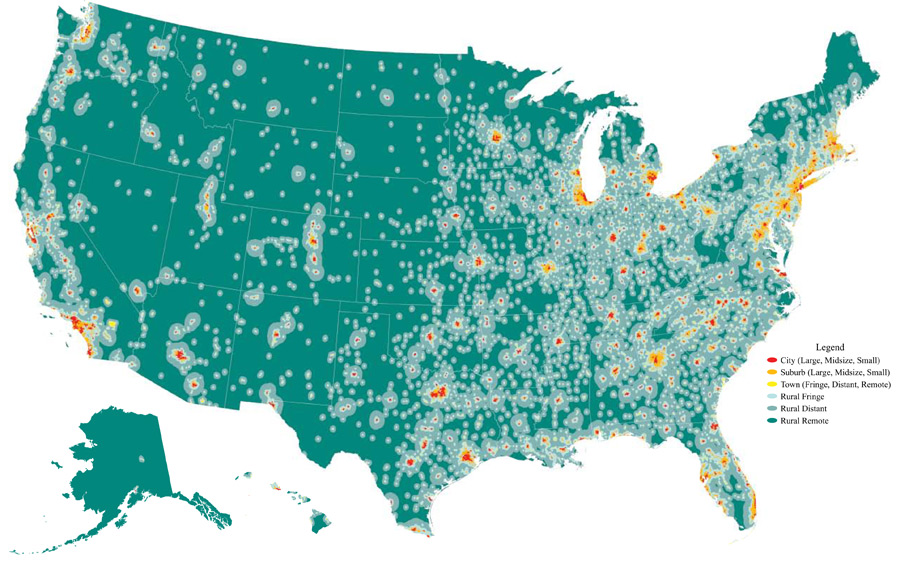 The problem, I think, is that suburban is a judgment call. For example, most people would probably talk about Evanston and Oak Park as 'suburbs' of Chicago, but each themselves have population enough to qualify as a UA. In some cases, one might even call Naperville a suburb of Chicago, even though it has almost 150K population.

I downloaded the shapefiles for US states and for urban areas and clusters from the Census and made a very crude map. Here's a screenshot of Northern Illinois and some of the adjacent states. In this map, yellow is "urban area" and red is "urban cluster". 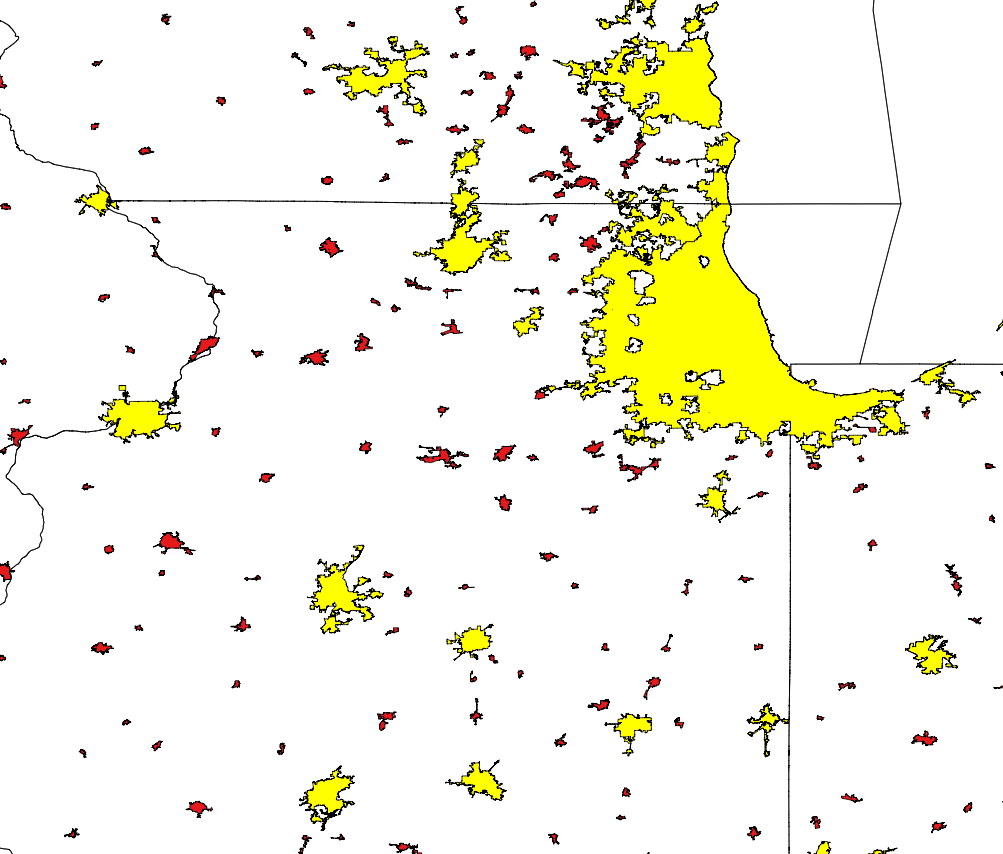 From this I think what we see is that you can't use either UA or UC to distinguish suburbs near a major city from the city itself.

I'm still learning about this, but I think you might be more interested in the distinction between "principal cities" of metropolitan/micropolitan areas (what the Census refers to as "Core-Based Statistical Areas" or CBSAs) and other places that are in the CBSA but are not the principal city. But I don't know of any Census Bureau product that readily slices up the data that way.

Today I read a story on FiveThirtyEight.com, How Suburban are Big American Cities. They surveyed people to ask if they considered their ZIP code urban, suburban, or rural. Their conclusion:

So that may be useful to someone...

Oddly enough, the best information that I could find on the topic seems to come from the DOT, in a 2003 FAQ (after the 2000 census) who suggest that neither one is 'suburbs' on their own, as they have some sort of an urban core to them:

What is an Urbanized Area (UZA)?

An Urbanized Area is a statistical geographic entity designated by the Census Bureau, consisting of a central core and adjacent densely settled territory that together contain at least 50,000 people, generally with an overall population density of at least 1,000 people per square mile. Within the transportation planning community Urbanized Areas are typically referred to as the UZAs. To learn more about Census geography, terms and criteria see http://www.census.gov/geo/www/

What is an Urban Cluster (UC)

An Urban Cluster is a new statistical geographic entity designated by the Census Bureau for the 2000 Census, consisting of a central core and adjacent densely settled territory that together contains between 2,500 and 49,999 people. Typically, the overall population density is at least 1,000 people per square mile. Urban Clusters are based on Census block and block group density and do not coincide with official municipal boundaries.

Unfortunately, their link to the Census terms & criteria is a dead link ... but the Census has a statement on one of their pages titled '2010 Census Urban and Rural Classification and Urban Area Criteria':

“Rural” encompasses all population, housing, and territory not included within an urban area.

To summarize, the two 'urban' areas are both a town or city and its suburbs, but the delination between UZA and UC are if there are 50k people in that general region. I don't believe that you can use that designation to distinguish between urban & suburbs.

After searching far and wide for the same data I was pointed at the USDA's Rural-Urban Continuum Codes.

There is no suburban classification but the county classes, especially for rural areas, seem to be more relatable than the Census tables.

2.2.1 Urban (Urbanized Areas, Urban Clusters) and Rural
The Census Bureau’s urban areas represent densely developed territory, and encompass residential, commercial, and other non-residential urban land uses. The boundaries of this urban footprint have been defined using measures based primarily on population counts and residential population density, but also through criteria that account for non-residential urban land uses, such as commercial, industrial, transportation, and open space that are part of the urban landscape. The Census Bureau delineates urban areas after each decennial census. Since the 1950 Census, the Census Bureau has reviewed and revised the urban criteria, as necessary, for each decennial census. These changes are discussed in Section 5.0.
Urban area boundaries are constructed from qualifying census tracts and census blocks. To qualify as an urban area, the territory must encompass at least 2,500 people, at least 1,500 of which reside outside institutional group quarters. Urban areas that contain 50,000 or more people are designated as Urbanized Areas (UAs); urban areas that contain at least 2,500 and less than 50,000 people are designated as Urban Clusters (UCs). The term “urban area” refers to both UAs and UCs. The term “rural” encompasses all population, housing, and territory not included within an urban area.
Education Demographic and Geographic Estimates - (EDGE) Program - Locale Boundaries, 2015

the latest updated map with a fresh link.

26
How to normalize the data when mapping crime reports?
5
What is the significance of Census ACS columns with line numbers ending in ".5" or ".7"?
6
What are the Units of Measure for the ZAREALAND & MAREALAND fields in US Census Data?
3
Where can I find data by "census tract numbers"
3
What is the latest census statistics on US demographics
6
What is the difference between Census TIGER and Gazetteer data?
5
What does a "null" result mean in the Census ACS API?
4
Crosswalk between FIPS codes and Wikipedia articles about U.S. Census Places
0
Race and poverty data at the census block group level?