What year do the BLS occupational datasets represent?

The BLS releases data on occupational level employment here: http://www.bls.gov/oes/tables.htm. Each section is labeled with a year (such as "May 2015"). 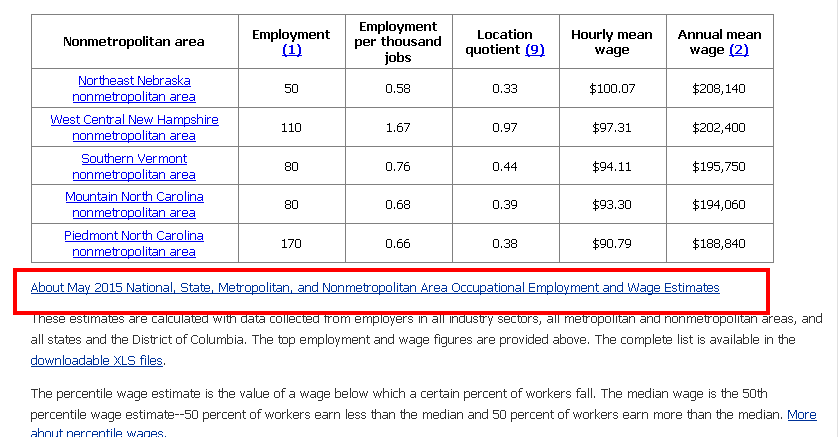 Now from the FAQ:

When will this year's OES estimates be available? Estimates are generally released in late March or early April. Please check the OES homepage around that time for a scheduled release date.

The also use the PAST 3 years of data to produce the May 2015 estimates.

Significant reductions in sampling error can be achieved by taking advantage of a full three years of data, covering 1.2 million establishments and about 57 percent of the employment in the United States. This feature is particularly important in improving the reliability of estimates for detailed occupations in small geographical areas. The May 2015 employment and wage estimates were calculated using data collected in the May 2015, November 2014, May 2014, November 2013, May 2013, and November 2012 semi-annual panels.

Not the answer you're looking for? Browse other questions tagged labor or ask your own question.

11
Average Job Salary by Title/Location/Etc. (US or Intl)
2
Employment data by income at the state level
1
what is the api call for getting all the inspection records, instead of getting default 200 records
3
Is the protocol different for accessing data.dol.gov and api.dol.gov?
1
Bureau of Labor Statistics Series ID Formats Question
1
Where can I find dislocated worker program participation data by US county?
4
Datasets of labor union metadata and membership in the United States