Dataset of languages and where they are spoken (sub-national)

I am looking for a dataset describing (nearly) all languages, and where they are spoken.

Bonus if the areas are linked to Geonames or another mainstream geographical dataset. Polygons are also OK.

It does not need to be a 1-1 mapping, as many places have several languages.

Official languages is OK, but actual usage (more than 1% of the locality's population has it as its mother tongue) of non-official languages would be even greater.
I am looking for sub-country granularity.

The CIA Word Factbook has a field listing for languages spoken per country and percentage of population that speaks it.

For finer grain, you can Google 'language spoken home dataset'. This will find census datasets related to the distribution of languages spoken. Below are some examples:

UNESCO Atlas of the World's Languages in Danger:
http://www.unesco.org/culture/languages-atlas/

Countries of the World Includes country language attribute for 249 countries - I believe either point or poly; has points for admin1 if you are looking subnational

Global Database of Events, Language, and Tone Uses the CAMEO taxonomy which I believe includes language but you'll have to check

The go-to site for linguists who are looking for language data (including e.g. their families, iso codes, position etc.) is glottolog.org. They have all their data available for download in several formats. wals.info is also useful, but that one uses a more restricted set of languages that might contain less sub-national languages.

Some time ago I made a csv file with ISO 3 language codes, latitude, and longitude of more than 7000 languages. The data was extracted from the RDF graph downloaded at Glottolog and sanitized (some coordinates missed a decimal point).

You can download the file iso3_language_codes_with_geo_coordinates.csv from this Github repository.

I just stumbled on the "World Atlas of Language Structures" on Kaggle, containing data on the linguistic structures in 2,679 languages, including geo coordinates for each language.

Splitting this into 2 posts so I can post more than 2 links. I would look at

Languages of the world Last time I checked data was bound in a pdf but that may have changed. For each country, details of each language including the region (in prose).

Indigenous living languages from Worldmapper Primarily sourced from ethnologue. Indigeneous languages of each country as Excel file, no sub-country data.

You may want to look at the language data from Ethnologue at http://www.ethnologue.com 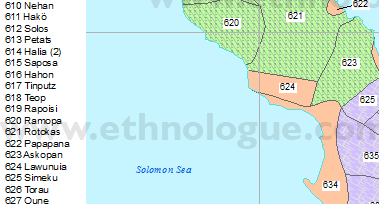 Not the answer you're looking for? Browse other questions tagged data-request geospatial language or ask your own question.

9
Any Open (Structured) Datasets for the World Factbook (Public Domain Country Profiles Published by the CIA)?

17
Trying to locate US Census Shapefiles for all MSA's (Metropolitan & Micropolitan Statistical Areas)
11
Dataset of sentences translated into many languages
12
Is a spoken digit dataset available?
1
Dataset where words are associated to colors
1
Find geographic data on the languages spoken in Russia
1
Data about countries and how they are divided into regions/countries/states/etc?
1
Where can I get word lists for Indian languages, specifically Hindi and Tamil?
1
Dataset of language families, sub-families and their relations other than Wikidata
2
Where do I find a database of each city in the world and the languages spoken there? (Ex. Barcelona - Catalan, Spanish vs. Madrid - Spanish)