Where to find spatio-temporal data?

I am an Italian student, and I'm looking for a particular dataset.

I'm interested in a model for spatial regression, with time-varying data. I'm looking for data with coordinates, measured in different moments for each point. Where can I find them?

I don't have a specific request for the dataset. I need to try a statistical model. This model works with data spatially distributed (so every datum is located with his coordinates), and for every point (located by the coordinates) I need more measurements, at different times.

I leave an example. I'm measuring the temperature at different points of my city during the day. I'm interested in two points: the center (coordinates...) and near the river (coordinates...). Data are measured hourly. So I have (starting from 8:00):

You could look for climate data on the open data portals around Italy, Regione Liguria has it for meteorogical measurements (http://www.cartografiarl.regione.liguria.it/SiraQualMeteo/Fruizione.asp) but doesn't have an API.

The CRU Temperature database, version 4 (CRUTEM4) includes information from some 6000 weather stations, with some time series reaching back to 1850.

Lists of raw data types are here, and in particular temperature. 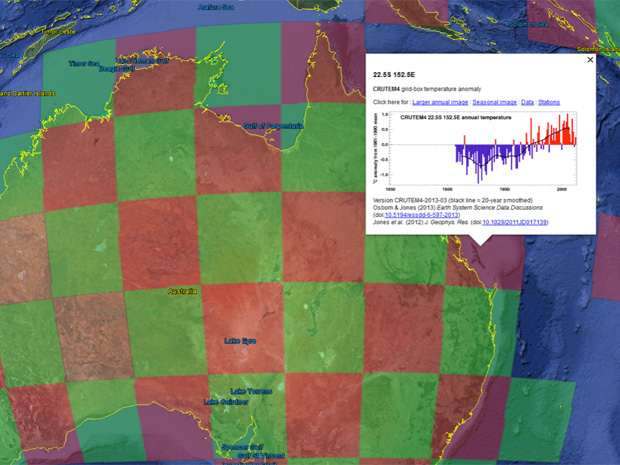 You have two basic options for data -- either time series data from a known location (or multiple locations), or reocurring satelite imagery.

Most fixed-location time series data will have a finer temporal resolution, but will be lower spatial resolution. You'll sometimes see this called a "sensor net" if it follows a fixed grid, but that term's also used in other fields, so it's difficult to find useful results using most search engines.

For urban temp data, you might want to see Muller et.al's 'Sensors and the Cirty' which catalogs 'Urban Meteorological Networks'. It'll at least give you the names of sensor networks to look for data from.

There's a lot of spatio-temporal satelite data, but the ones with higher resolution (eg, Landsat) take days before they come back to give another pass (16 days for Landsat 7 & 8). The geostationary satellites such as GOES tend to have fixed telescopes, which likely won't give you the resolution needed (the 'high resolution' images are ~64km^2/pixel).

update : I was wrong about the satellites -- because I didn't consider that you might get data from more than one satellite flying the same instrument. MODIS is flown on both Aqua and Terra, has 250m resolution, and they each scan the whole earth every 1.2 days. Due to how they scan, there's also overlap in the passes, so stuff not directly below the satellite track can be imaged twice (with distortion).

0
Where do I get hourly temperature data for cities with a high spatial resolution?

7
Where can I find open data on healthcare quality indicators?
4
Yule's disturbed pendulum time series example
7
Where to find number of companies by year revenue?
3
Looking for a data set that gradually changes through the time
5
Where can I get the coordinates datasets of water bodies of a country?
4
San Francisco Housing Data
2
Looking for Spatio-temporal Datasets