Background: the Dutch government publishes certain Covid-related metrics via a dashboard (https://coronadashboard.government.nl/) and I have a few questions about the underlying data science.

NUMBER OF POSITIVES
It's shown either as-is or as ratio per 100K inhabitants. Since population of the country hasn't changed significantly within 1 year, they both just reflect the number of positive cases:

OBJECTION: if people get themselves tested more (eg going abroad on holiday during July/August, and are required by the destination countries to get tested), even if the same proportion of tests are positive, then because we have more tests, we'll have more positives, so by measuring # positives and not adjusting to # tests, we're subject to various biases towards # tested.

PERCENTAGE OF TESTS WHICH ARE POSITIVE
This one is the ratio # positives / # tests. Surprisingly, the trends are very similar, which seems to invalidate (at least partially) the objection formulated earlier: 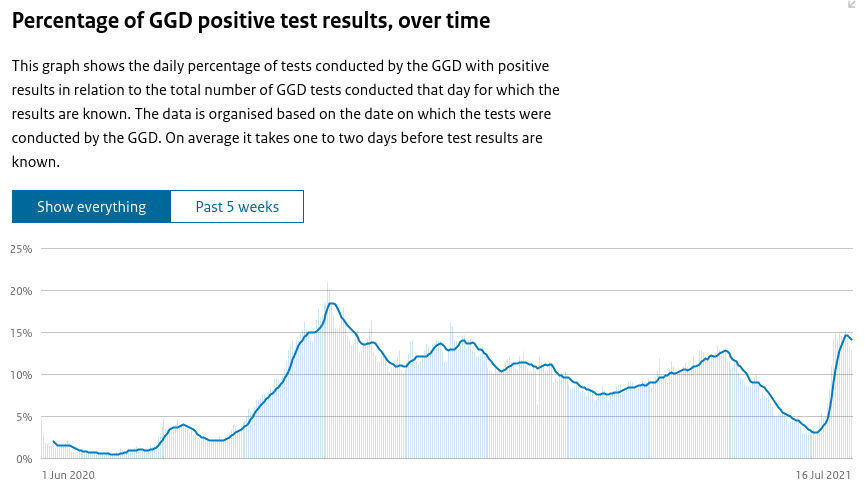 Q1: Is there an explanation why the trends in [# positives] and [# positives / # tested] align so well?

I downloaded the source data and compared both metrics:

Here is what I get:

As we can see the trends follow each other closely, the correlation coefficient on that dataset is actually 0.88 which confirms what we're seeing

Q2: Despite the very strong correlation, [# positives / # tested] seems a more robust metric than [# positives] as it removes biases towards # tested, so is there any reason why we would want to report on [# positives] at all?

We're interested in the true total number of new infections, but since you can't test everyone all the time we'll have to make do with a proxy for this number.

Of all of those covid-positive groups, only number of positive tests from people without symptoms or contact also depends on other incentives people have to get tested (vacations, etc.). And keep in mind that a portion of these people are pre-symptomatic and will develop symptoms a few days, so they would have moved to the 'symptoms' group. For those people, their positive test result effectively just came a few days early.

So the question boils down to which of the covid-positive groups is larger: those with symptoms and/or contact, or those without contact and who remain without symptoms?

Given that most infected people seem to experience at least some symptoms, and that (when not over capacity) contact tracing accounts for nearly half of the cases (source, page 28). The with symptoms and/or contact group appears to be the largest by far, so total number of positive tests would be a more accurate proxy for the total number of infections.

That's not to say that we shouldn't keep an eye out for a sudden spike in infections from the no contact/symptoms group and possibly correct for that.

Not the answer you're looking for? Browse other questions tagged medical covid19 or ask your own question.

8
Data for "Driving is Why You're Fat" graph
2
Data about drugs/medicine and outcomes
0
Datasets with pre and post coronavirus data
1
What website to use to find data for my highschool project on BMI and Covid deaths?
1
COVID-19 cases broken down by whether the individuals are vaccinated, and if so, with which vaccine