People who code: we want your input. Take the Survey

Ideally something within the past 10yrs and for an even year (aligns with election data I already have).

That said, I'll take what I can get, and data on individual ages has been hard to find, period.

This is my first post here, so if context is appreciate on this site, see below. Otherwise, this is the short and sweet request!

I recently read a theory on voter fraud with the core finding being that one could predict votes cast from registered voters, claiming that the resemblance between the shapes of the two curves is too similar to be accidental.

I believe this is an age-based analog of this xkcd cartoon, and that the "illusion" (i.e. this "wow" factor on shape alignment between two curves) stems from the fact that we never see data for individual age demographics plotted.

I did find it for all elections going back to 2000 to show that VAP, VEP, registrations, and all curves always match in shape. No surprises, as of those who exist some smooth % multiplier across the ages tracks with those who register and vote (from that same population). 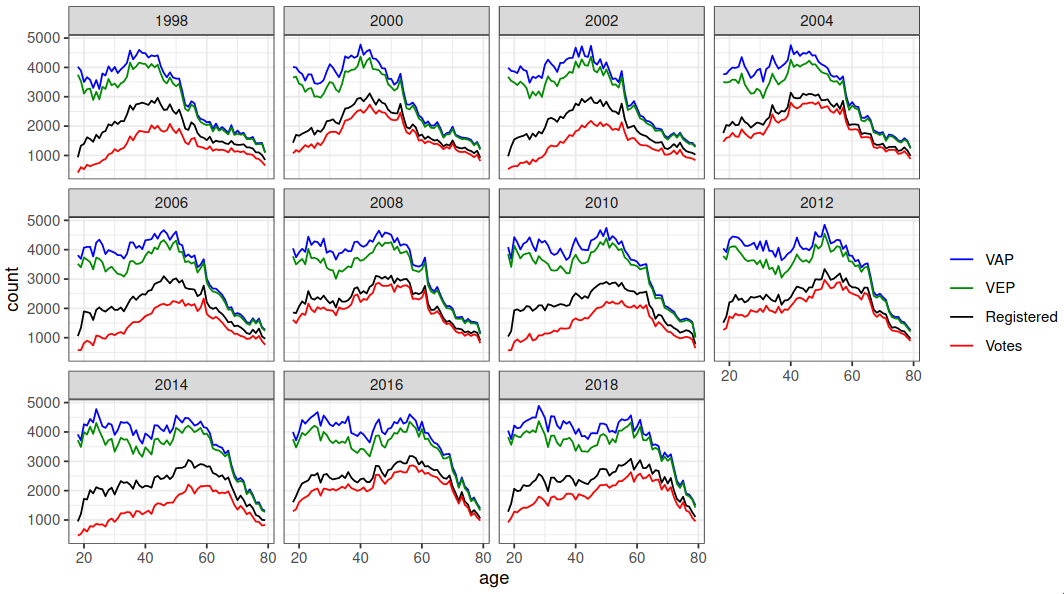 Now I'd like to find some preposterous dataset on individual age, showing that you can correlate any data along age demographics with any other data on age demographics because both track to the parent population (kind of like "any activity tends to happen more in summer, which is why burlaries and ice cream eating both go up").

That said, it needs to be something that is relatively "smooth" across each age. No sharp changes for e.g. drinking age or retirement. Perhaps the number of people by age who: visit the doctor, drive, travel out of state/country, get a passport, buy stock, watch youtube... anything like that where given some age being higher than average compared to neighboring ages, this disproportionate spike will carry through in the measure as well.

Browse other questions tagged usa demographics or ask your own question.

3
Data mining social group's interests, demographics, and geography
3
Looking for a source of data for these specific United States Demographics for People and Businesses
2
Consumer Demographics for Individual Products
5
Median age by state/city in Germany?
7
API or datasets for age & gender distributions of the world
4
Recent Demographic and Economic Data at CBSA-level
3
Where is the official source for UK population + age profiles data