Why are some tract geometries duplicated in census data?

I have been writing a Python program to analyze the contents of shapefiles from the 2010 U.S. census, and I came across some odd duplication that I cannot explain. For example, in the 2010 shapefile data that describes census tracts in the state of Texas, shapeRecord(546) part 0 has a list of geographic points of a polygon that are identical to shapeRecord(547) part 1. These records correspond to geo ID 48159950200, Census Tract 9502 Franklin County, TX and geo ID 48159950100, Census Tract 9501, Franklin County, TX, respectively. This seems to suggest that the first part of census tract 9502 geographically overlaps with the second part of census tract 9501, and the corresponding population data shows that they have different populations.

US census geography follows a strict hierarchy, and two features within the same type of geography are discrete and can never overlap and cover the same area (tracts can't overlap tracts, counties can't overlap counties, etc). In your example, tract 9502 is completely surrounded by tract 9501, or to put it another way, tract 9501 is like a donut with a hole in the middle, and the hole is occupied by tract 9502. This isn't uncommon as a tract may be delineated around a concentrated settlement that's surrounded by a tract that's more rural / less populated.

I'm not sure what Python module you're using, but what you may be seeing when you look at the geometry string for tract 9501 is that it includes that donut - it's part of 9501's interior boundary (called an interior ring), and would be exactly the same as 9502's exterior boundary. For example, see PostGIS representation for polygon with a hole: 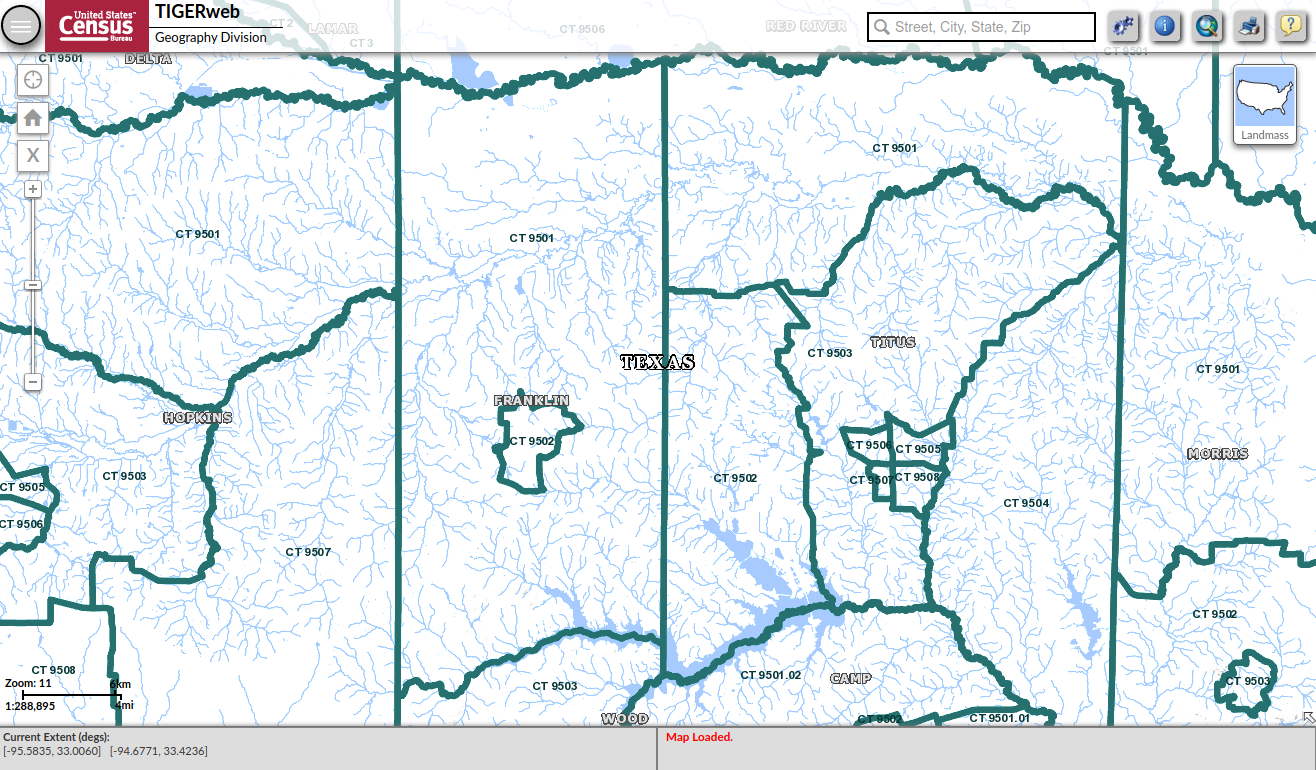 Not the answer you're looking for? Browse other questions tagged geospatial us-census or ask your own question.

17
Trying to locate US Census Shapefiles for all MSA's (Metropolitan & Micropolitan Statistical Areas)
3
Where can I find data by "census tract numbers"
6
Accurately Using Census Tract Data and Total Population
9
Census API data across superior geographies
6
How can you get nationwide data of a particular type from the US Census website?
4
Are there freely available equivalents to the HUD crosswalk data (zip code to county/census mapping) that go back farther in time?
1
What are some good approaches for predicting sub-state level population changes before census data is released
6
Do census tract geographic shapefile data update annually?
1
From where do I get shapefiles for all the states in USA at Census Tract level with "population" or "population density" data too?
1
USA block-level census data for mass-download