What is the percentage of internet users in the USA? Discrepancy between Google result and World bank data

The Google default results for "internet user United States" is 84 % of the population. 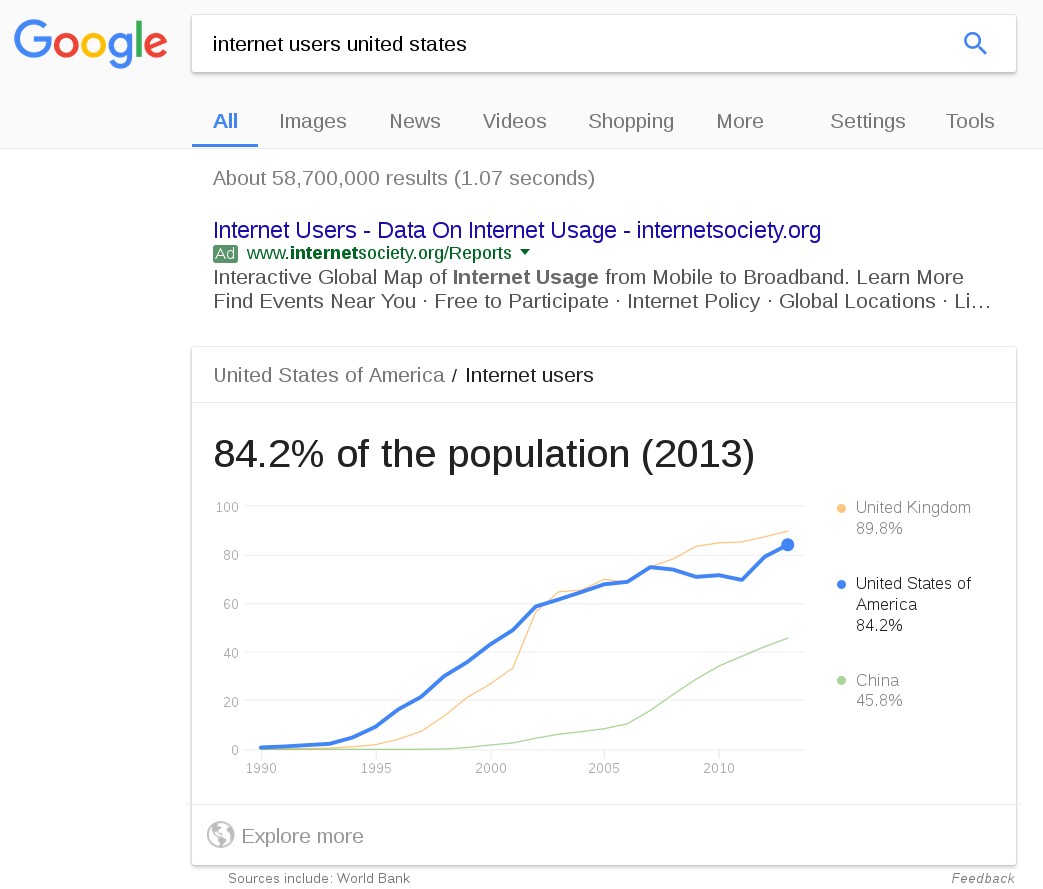 The source is the World Bank, but when I go to the World Bank website, it shows only 74% internet users in the United States in 2015.

I noticed this because I'm using a model in which I only take into account countries which have more than 80% of internet users.

This does not resolve the conflict, but traces its origin.

One of the first links that appears from your Google query is for Internet Live Stats that also presents the 84.2% number and what seems to be a justification by giving the total population and the number of internet users. That source cites "Elaboration of data by International Telecommunication Union (ITU), World Bank, and United Nations Population Division." (bolding mine) So it is odd that it disagrees with the World Bank number.

There is something suspicious about the Internet Live Stats data. Using the 2013 data to match the Google chart, they give the basis for their percentage: the number of internet users (267,028,444) and the number of people in the US (317,135,919). First of all, Note that these figure are reported with 9-digit accuracy. This figure could only have been accurate for a single day in 2013. Acording to the US Census Bureau US population was:

Similarly, the number of internet users changes rapidly, so 9-digit reporting is odd. However, note that 267028444 / 317135919 = 0.84200000063695091. It seems a bit unlikely that it works out so that the ratio is a one-decimal place percentage to 9 digit accuracy. The reported percentage was surely not calculated from these numbers. Rather, at least one of the numbers was calculated from the percentage.

So there is nothing left to do but look at the ITU. I could only find the proportion data at the ITU (not the population numbers used to calculate the percentage), but this page at the ITU offers a couple of useful spreadsheets. There is a link for a spreadsheet call Percentage of Individuals using the Internet It says that the US percentage of individual users of the internet was 74.45 in 2015 (71.40% in 2013). The same page also offers Core indicators on access to and use of ICT by households and individuals This second spreadsheet says that the percentage was 74.6% in 2015. Those two seem to point to the lower figure. BUT there are some links at the lower right hand side of the page, one of which is for the Google Data Explorer which offers "Explore and visualize key ICT indicators with Google Public Data Explorer." Presumably, this is Google analytic tools applied to ITU data. Using that tool, you can select "Percentage of Individuals using the Internet" and "United States". The resulting chart says that the percentage was 84.2% in 2013 (the latest date on the chart).

So the inconsistency seems to originate from within the ITU.

Disclaimer: This is what was available on the mentioned sites on 15 Jan 2017.

Not the answer you're looking for? Browse other questions tagged usa internet worldbank or ask your own question.

13
What is the difference between US Census definitions of "Urbanized Areas" and "Urban Clusters"?
6
How can you get nationwide data of a particular type from the US Census website?
10
Data Licenses for US Government Data not in data.gov
1
Discrepancies between World Bank and OECD GDP data
1
What exactly do the variables named "Unemployment rate, via Census data" and "Poverty rate, via Census data" represent?
3
Exporting data from https://taggs.hhs.gov?