Data of GDP values of cities in the world

I am looking for a data which lists GDP (gross domestic product) values of all the cities in the world. I already looked at the Wikipedia page List of cities by GDP but the list is too limited for me. Specifically, I would like to have the data for each city which has airport in it.

Does anybody know of such an exhaustive list of cities for GDP?

It's only the US, but as a start, the Bureau of Economic Analysis (BEA).

Real gross domestic product (GDP) increased in 292 metropolitan areas in 2015, led by growth in professional and business services; wholesale and retail trade; and finance, insurance, real estate, rental and leasing, according to statistics on the geographic breakout of GDP released today by the Bureau of Economic Analysis. Collectively, real GDP for U. S. metropolitan areas increased 2.5 percent in 2015 after increasing 2.3 percent in 2014.

There is historical data, until 2015 at the time of writing, which can be corrected for inflation.

Each region can be divided into industrial sectors.

There is a data explorer tool and a programming API 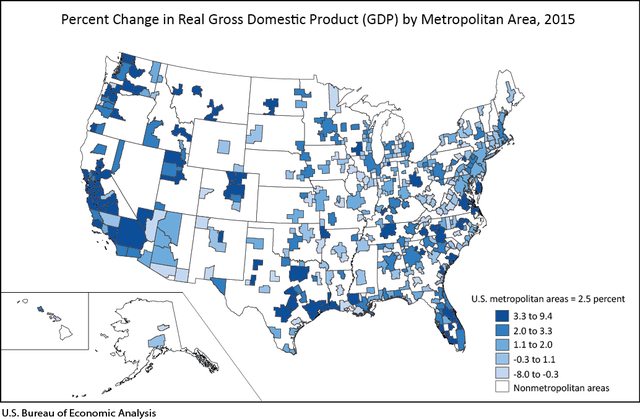 Not the answer you're looking for? Browse other questions tagged data-request city gdp or ask your own question.

5
Public transport maps for all cities
7
Macro Indicators of Economic Data by ZIP Codes or Cities in the US
5
Queryable source of large cities
4
List of all world cities with populations over 100,000
4
Largest U.S. cities per state in 1950
1
UK Cities and Towns
3
Where can I find data on GDP of US counties?
0
Which examples of real-world situations follow the Cauchy distribution?